Ron Brown, member of Canada Racquetball and PARC’s Vice President North America, has been inducted as a member of the Indigenous Sports Hall Of Fame. Congratulations Ron and all the Canadian racquetball community!

Brown, who has a long history with the sport of racquetball, was one of the inaugural members inducted to both all-Indigenous Halls of Fame, two of the first in North America. Brown is of Mi’kmaw ancestry and is a proud member of the Annapolis Valley Mi’kmaq First Nation in Cambridge, Nova Scotia.

“From baseball to racquetball, roller hockey to running, we celebrated the legacy, passion, and contribution made by our inductees,” stated the Manitoba Aboriginal Sport and Recreation Council (MASRC) in their news post about the Manitoba Indigenous Sports Hall of Fame induction ceremony. Brown was inducted along-side fourteen other honourees who have also made significant contributions to sport including Reggie Leach, Jocelyn Larocque, Angela Chalmers and Theoren Fleury.

“I am thrilled to be a member of these two Halls of Fame, but to be one of the first group of inductees to be honoured is pretty special.” said Brown. “I am very proud of my heritage and to be recognized in the midst of two incredible groups of Indigenous athletes and builders is humbling.”

Call to Action #87 calls upon “all levels of government, in collaboration with Aboriginal peoples, sports halls of fame, and other relevant organizations, to provide public education that tells the national story of Aboriginal athletes in history.”

The goal of the North American Indigenous Athletics Hall of Fame is to honour and recognize the Indigenous sport cultures of Canada and the United States by recognizing outstanding leadership and achievement in individual and team athletics.

Brown’s story is an important one to share. His ancestry is passed down from his maternal grandmother, who lost many rights through the Gradual Enfranchisement Act of 1869. The Act, which later became part of the Indian Act, granted extreme control over those with First Nations status and marked the beginning of gender-based restrictions.

As a result, when Brown’s grandmother married a non-Native man, she was stripped of her First Nations status, as were any children from her marriage. It has been a generational fight for the reinstatement of rights for those who lost their status and it wasn’t until 2011 that Brown was granted his First Nations status.

Brown’s induction into the Manitoba Indigenous Sports Hall of Fame not only highlights his incredible contribution to sport but provides context as to why the work of the Truth and Reconciliation Commission is so important.

Brown has worked directly with programs targeted at those who are marginalized. As the manager of Supreme Racquet Club in Winnipeg, Brown ensured inner city youth in Winnipeg had the opportunity to learn and play racquetball. At the international level, Brown contributed to the development of coaches from other Pan American nations. He has continued his important work professionally through his current role as the President and CEO of the Boys and Girls Clubs of Winnipeg, and as a volunteer with many critical community organizations including the Winnipeg Poverty Reduction Council, Aboriginal Council of Winnipeg, and the Winnipeg Indigenous Executive Circle.

More information about the Manitoba Indigenous Sports Hall of Fame, including Ron Brown’s biography can be found by clicking here.

More information about the North American Indigenous Sports Hall of Fame can be found by clicking here.

With this action, Racquet:Next becomes the first electronic game of any sort to become an official global sport.

IRF [Colorado Springs, USA]; Racket:Next developer One Hamsa [Tel Aviv, Israel]; and the Metaverse Sports Association [San Francisco, USA]; signed a Memorandum of Understanding in July 2021. At that time, the IRF endorsed Racket:Next and committed to progress toward full sanctioning of the game as a sport.

IRF Secretary General Luke St. Onge said at the time: “When we realized what this combination could mean not only for our federation but for all of racquet sport, we jumped all over it. This will be a game-changer both for us and for world sport. We look forward to sharing so much more as this exciting partnership unfolds.”

As St. Onge predicted, the partnership has unfolded and “the game” has changed. Dean Schear, IRF Chief Financial Officer and Chair of the IRF Virtual Sports Committee, added, “Bottom line, we have a great vision, a great team, and the sense of urgency and commitment to act now.”

Metaverse Sports Association CEO Victor Bond, who drove and facilitated the agreement, commented, “This is a marriage made in future-sport heaven: a world-class developer and a unique, successful, and wonderful game with a fully global international IOC-recognized sports federation that has the vision and the grit to not just look around the corner but to go there.” Bond added, “This is one big step in our collaboration and one gigantic leap for the new technology of sport.”

One Hamsa CEO Assaf “Usul” Ronen added: “This first-ever sanctioning act supports Racket:Next’s core design principles as a fully athletic and visceral game, allowing players of all racquet sports – not only racquetball – to make every racket sport move, except for those that would not work in the average living room (like a racquetball dive or a clay court tennis slide), immersed inside a lighted, responsive, audio-filled dome, in a game that is purely skill based.”

Ronen continued, “Racket:Next has already surpassed 300,000 players worldwide, led by the fastest-growing VR headset, the Meta Quest 2, in which it’s been a top-rated title since its launch in 2019. Since 2021 we also witness a surge of players on emerging China-based platforms. Racquet sports, all together, is the largest sports category in the world, eclipsing even world football.

One Hamsa: Born to the deserts of the middle east, One Hamsa is a game design studio formed to craft quality VR games. We care about unique content, unreasonable levels of polish, and providing our players with value.

August 28, 2021 – In an effort to be able offer both an IRF World Championships (Adult) and an IRF World Junior Championships, as well as to be mindful of and concerned for the pandemic-related health and safety of country delegations as well as the host countries themselves, the IRF today announces changes in plans for both events.

The IRF World Junior Championships dates reflect only a small change (see below), but the host country is now Guatemala and not Costa Rica as previously planned. We hope to return to Costa Rica in 2022, and we are so grateful for Costa Rica’s dedicated ongoing partnership with the IRF in serving the worldwide racquetball family. Official invitations are being developed for both events and will reach national federations as soon as possible. We strongly suggest that everyone wait to receive these before booking airfare. Even then, we suggest researching refundable flights and/or travel insurance possibilities since we all know the pandemic often compels changes as new information comes available.

The general plan, subject to modifications, is:

While we certainly recognize that this schedule will present various challenges for the delegations and for the IRF, we are excited at the prospect of Junior players being able to meet the world’s best racquetball athletes and hopefully observe them compete in a World Championships event (pandemic measures permitting).

To address that point, we are working to develop protocols and approaches to put as many safety measures into place as necessary and indicated to reduce risk. Our first priority is the well-being of everyone involved. We appreciate the collaboration and relationship with the IRT and LPRT as we worked together to find the best way to be able to host these IRF international competitions with as little impact as possible on their event schedules. There is much more information to come! We are grateful for the understanding and flexibility on everyone’s part as we all continue to navigate the pandemic as best we can in our lives and in our sport.

In conclusion, we’d like to mention two very uplifting points:

We are excited for Guatemala as they host their first international event on their long-awaited brand new courts. Congratulations, Guatemala!

This decision was taken due to the measures against COVID-19 in some countries that would normally participate as well as the current COVID restrictions in the host country.

The rescheduled date for this competition is 9-17 April 2022, and more information will be shared as it becomes available.

PARC President Marcelo Gómez Pacheco commented, “We look forward to the improvement of the world situation, and we wish everyone good health and safety until we can all be together once again.”

The IOC-recognized International Racquetball Federation (IRF), based in Colorado Springs, USA, has followed the IOC’s announcement of their Virtual Sports Series with a Memorandum of Understanding to collaborate in developing Tel Aviv-based One Hamsa’s immersive virtual reality (VR) game Racket:Nx as a potential full Olympic Virtual Sport and an eventual candidate for the Olympic Games.

The IOC’s Virtual Sports Series includes five games which simulate cycling, rowing, baseball, sailing, and auto racing, but only two are physical games [for cycling and rowing] and presently none are immersive virtual reality.

IRF President Osvaldo Maggi said: “When we realized what this combination could mean not only for our federation, but for all of racquet sport, we jumped all over it. This will be a game-changer, for us and for world sport. We look forward to sharing so much more as this exciting partnership unfolds.”

Virtual Sports Association CEO Victor Bond, who brokered the deal, says: “This is a marriage made in future-sport heaven: a world-class developer and a unique, successful, and wonderful game, with a fully global international IOC-recognized sports federation, that has the vision and the grit to not just see around the corner but to go there.”

One Hamsa CEO Assaf “Usul” Ronen, added: “Racket:Nx is fully immersive and fully athletic, allowing players of all racquet sports – not only racquetball – to play full out inside a lighted, player-responsive, sound and music-filled dome, in a game that is blow-your-mind unique and engaging. The moves of all racquet sports are supported, except for those that would not work in the average living room or family room, like a racquetball dive or a clay court tennis slide.”

Ronen continued, “Racket:Nx has over 150,000 players on most VR platforms, including the fastest-growing VR headset, the Oculus Quest 2. That means that this game is more likely to achieve the mass acceptance that the IOC seeks. Racquet sports, it turns out, all together, maybe the largest sports category in the world, eclipsing even world football.”

With virtual reality hitting the mainstream with the Quest 2, and with the IOC ushering in the era of Olympic Virtual Sport, this trailblazing partnership is betting on the roles that immersive virtual sport will play in the mass adoption of VR and in the extension of the Olympic Games.

– For more information on the IOC’s Virtual Sports Series:

– For more information on Racket:Nx:

– For more information on the International Racquetball Federation:

– For more information on One Hamsa:

– For more information on the Virtual Sports Association: 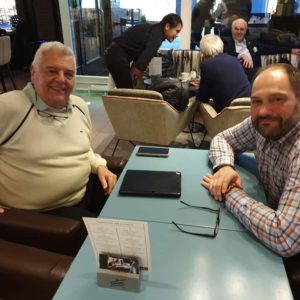 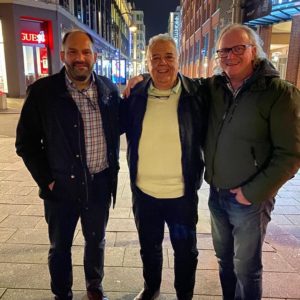